All Posts in Category: Health Basics

Your condition involves narrowing of the cervical spinal canal discovered on imaging that appears to have no current symptoms nor findings on exam and therefore surgery is not indicated at this point even though there is pressure to some degree on your spinal cord.  Neck pain without other red flag symptoms does not warrant surgical recommendations.

Why one person with cervical spinal stenosis is having major symptoms and another with the same MRI findings has none is unknown but very commonly seen.

In the normal spinal canal the spinal cord floats freely in the cerebrospinal fluid, CSF or spinal fluid, which serves as a protective shock absorber.  In patients with Cervical Spinal Stenosis the amount of CSF around the spinal cord is markedly diminished reducing the ability to protect the spinal cord from normal impacts or stronger forces.   This increases the risk of injury to the spinal cord from various normally tolerated forces.  You have seen this in football games when a player gets a sudden hard impact to the head and neck and suddenly goes paralyzed.   Most of these patients had this impact injury develop due to having such a blow in the setting of previously asymptomatic cervical spinal stenosis that was likely present since birth but never known to exist until the injury.   Fortunately the NCAA and NFL have focused on these “targeting” incidents in recent years.

Most of the time if the patient has no symptoms neurosurgeons will suggest non surgical follow up observation only with recommendations to avoid high risk activities unless:

Many patients ask why do we not go ahead and do surgery if there is cervical spinal stenosis even without symptoms or exam findings?

When non-surgical observation only is the plan it is recommended that you avoid:

The above is recommended in order to mitigate the increased risk of spinal cord injury in patients with cervical stenosis as compared to someone with a normal spinal canal.    Again people without cervical spinal stenosis have risks of spinal cord injury and paralysis with the above but those with cervical spinal stenosis have a statically increased risk of injury with the same force applied as compared to a person with a normal spinal canal.  Nevertheless, the same applies to breaking a leg or an arm from a fall in patients with osteoporosis versus normal bone.  We would not recommend putting casts on all the limbs of osteoporotic patients to prevent fractures from a fall!

Typically if non surgical treatment is the plan you will be followed up after a period of time with a clinical follow up visit +/- a follow up MRI at variable intervals for years to come and be advised to contact your neurosurgeon sooner if you develop any concerning red flag symptoms listed below. 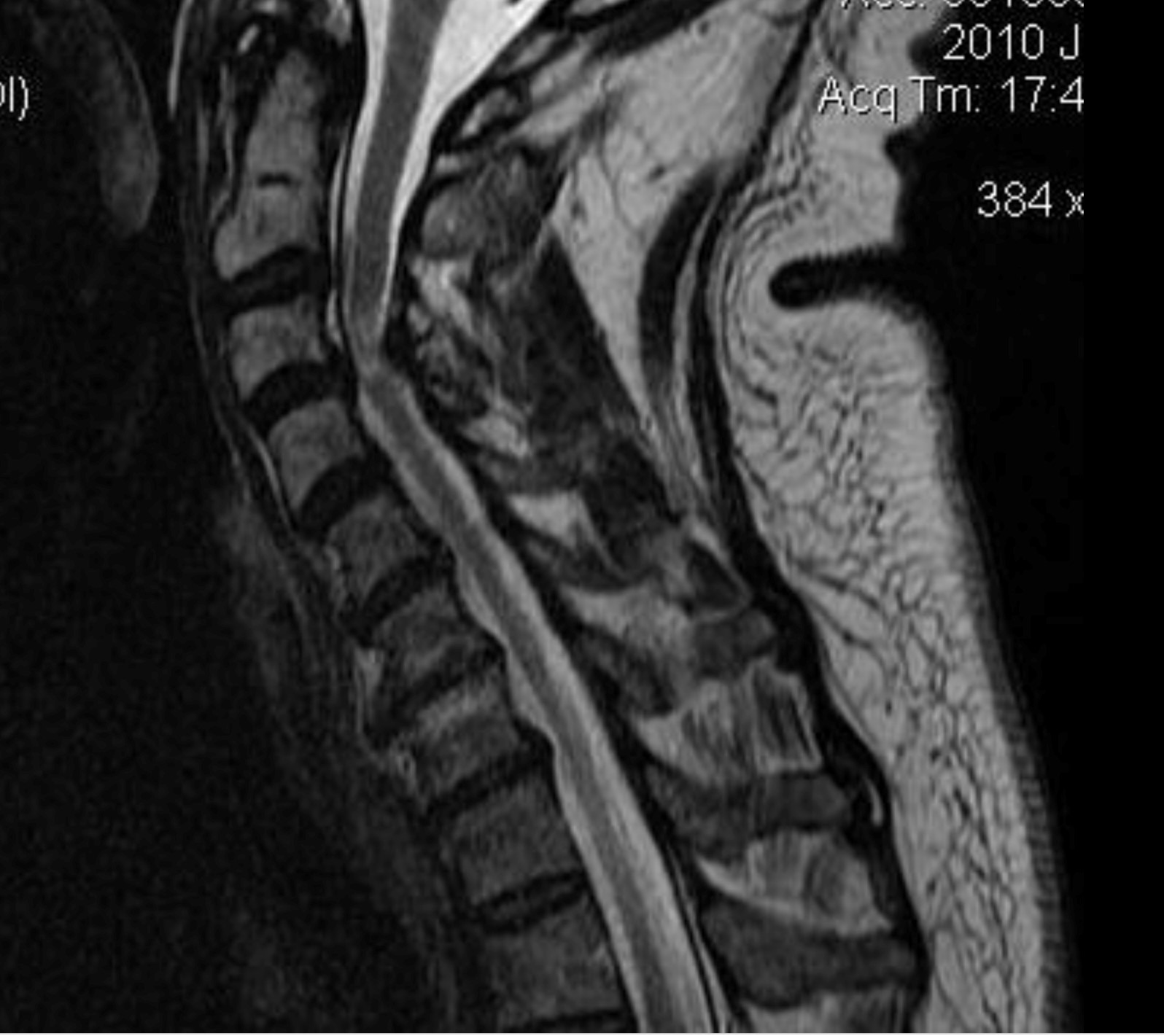 Once patients develop symptoms and/or findings on exam then the condition is called “cervical myelopathy”.    Typically the MRI will show abnormal signal changes like the images above due to edema of the spinal cord in patients that are symptomatic from the cervical spinal stenosis.    This term is used to describe dysfunction of the spinal cord from many causes but in this case it is due to cervical spinal stenosis and the damage from the pressure on the actual spinal cord.

MANY PATIENTS WITH SYMPTOMATIC CERVICAL SPINAL STENOSIS, MYELOPATHY, WILL HAVE LITTLE TO NO NECK OR ARM PAIN BUT RATHER ONE OR MORE OF THE NON PAINFUL RED FLAGS BELOW.

Red flag symptoms to be aware of that might be indicative of cervical stenosis becoming symptomatic include any of the following:

If symptoms develop or MRI findings worsen or findings on neurological exam appear then surgery will likely be needed.

Hopefully your cervical spinal stenosis will never need treatment but please carefully read the warnings above and be mindful of the red flag symptoms discussed.  Please report to your neurosurgeon development of any concerning symptoms when they develop.  Do not wait for the follow up visit if these symptoms develop sooner.   Regardless, keep your scheduled follow up plan even if you have zero symptoms and are pain free!

Any questions or concerns visit legacyneuro.com

Seizures do not usually require emergency medical attention. Only call 911 if one or more of these are true:

These are general steps to help someone who is having any type seizure:

When most people think of a seizure, they think of a generalized tonic-clonic seizure, also called a grand mal seizure. In this type of seizure, the person may cry out, fall, shake or jerk, and become unaware of what’s going on around them.

Here are things you can do to help someone who is having this type of seizure:

Knowing what NOT to do is important for keeping a person safe during or after a seizure.

Never do any of the following things:

All too often a patient will come into clinic that has been very diligent with a fitness regime for years but despite preemptive health measures the patient will develop low back pain. It is described as a deep ache that is worse in the morning and/or night begins to interfere with the normal activities of his/her day. Seems like such a waste of time to put all the effort into staying fit then still having pain, right?

Often there is no specific injury and very little diagnostic grounds other than “facet hypertrophy” (described normally as arthritis in the low back) to support the claim of this pain. Chances are with most of these patients, arthritis did not develop in the last week or month. It is an accumulation of years of repetitive weightbearing and compressive forces to the spine that have brought about this change. The question remains, what can be done to improve this pain when you already believed you were doing all the right things to stay healthy?

In terms of treatment with patients that present with the history that I have outlined above; moderation becomes a recurrent phrase of emphasis. Other useful tools are variation and observation. Mixing up the cardio routine with a variation of biking (indoor or outdoor), swimming, and walking. If you have a gym routine for lifting weights or resistance exercises, try mixing things up by doing body weight activities or group aerobics. It may also be a nice change of pace to do a beginner’s class of yoga or Pilates. Moderation and observation are key parts to avoiding overuse injuries that cause setbacks.

There is current research to suggest that indeed there is a “happy medium” to activity. Too much activity can have as much of a negative impact on the body as doing nothing at all. Take home points:

If you are having setbacks due to low back/neck pain from too much activity or you find yourself sedentary and have no idea where to start, give us a call at 501-661-0077 for a consultation and evaluation at Legacy Spine and Neurological Specialists so that we can get you Back to Life!

1.  Memory changes that disrupt daily life, such as forgetting important dates or events

2. Challenges in planning or solving problems, such as keeping track of bills

3. Difficulty completing familiar tasks, such as driving to a known location

4. Confusion with time or place

Memory loss is a common neurological concern. Often, mild forgetfulness is due to stress, distraction, or even depression. Though patients can experience a little forgetfulness with aging, significant changes in memory or thinking are never only attributed to age.

Arkansas is ranked 4th among the nation in adult diabetes rates. This is somewhat of an alarming statistic. There are different forms of diabetes but type 2 diabetes is the one I would like to highlight. One complication that can be associated with type 2 diabetes is neuropathy.

With the Holidays right around the corner, there are so many opportunities to over indulge, so here are some good tips to fight off those extra LBs and stay fit this Holiday Season!

Exercise: Its easy to skip out on your exercise during this extremely busy time of year, but here are some ideas to keep you motivated.

Many migraine patients recognize specific triggers to their headaches. Migraine patients are more sensitive to certain substances in their foods and environments as well as changes to their routine. Too much or too little sleep, changes in exercise routines, and processed foods can worsen migraine headaches.Heavy, flowery scents or cigarette smoke are frequent triggers.

Task-specific dystonia, also known as “writers cramp” can occur in people who do repetitive movements.

It gets its name task-specific because classically, it only occurs during one specific task. It can be inherited, secondary to an underlying neurologic cause, or occur sporadically.

It is often initiated by voluntary movement with symptoms “overflowing” into adjacent muscles causing involuntary muscle cramping of adjacent fingers, wrist, and can include forearm. It can sometimes resemble a tremor. The most common task-specific dystonia is writers cramp, but this also frequently occurs in musicians due to the repetitive motions of playing an instrument. Treatments range from conservative measures such as occupational therapy and stretching to Botulinum toxin (Botox) injections of affected muscles if severely limiting function.