1.  Memory changes that disrupt daily life, such as forgetting important dates or events

2. Challenges in planning or solving problems, such as keeping track of bills

3. Difficulty completing familiar tasks, such as driving to a known location

4. Confusion with time or place

Task-specific dystonia, also known as “writers cramp” can occur in people who do repetitive movements.

It gets its name task-specific because classically, it only occurs during one specific task. It can be inherited, secondary to an underlying neurologic cause, or occur sporadically.

It is often initiated by voluntary movement with symptoms “overflowing” into adjacent muscles causing involuntary muscle cramping of adjacent fingers, wrist, and can include forearm. It can sometimes resemble a tremor. The most common task-specific dystonia is writers cramp, but this also frequently occurs in musicians due to the repetitive motions of playing an instrument. Treatments range from conservative measures such as occupational therapy and stretching to Botulinum toxin (Botox) injections of affected muscles if severely limiting function.

Patients frequently complain of numbness and tingling of the hands.

The most common causes include:

Tremor is an involuntary shaking movement, usually affecting the hands and head, but may affect any part of the body included the feet or torso.

Parkinson’s is a progressive disease caused by a decreased level of dopamine produced by nerve cells in the brain, in an area called the substantia nigra. Dopamine levels drop as the disease progresses.  Dopamine sends messages in the brain to areas that control movement and coordination. With decreased dopamine, patients have difficulty controlling their limb and overall body movement along with their emotions.

Approximately 1,000,000 adults in the USA have Parkinson’s Disease, while males have a 50% higher risk than females.

Physical therapists are defined by the APTA as “experts in movement and function” but are very often associated with an environment in which they deal with patients who are ill or have undergone surgery. A large part of a physical therapist’s program is directed at preventing injury, loss of movement, and even surgery.

Myelopathy is a term used to describe dysfunction of the spinal cord. This most commonly occurs due to degenerative or aging changes in the spine.  Degenerative changes occur in everyone to varying degrees. Common radiologic signs of degenerative changes include enlargement of the joints, degradation of the disks and bone, bone spurs and even herniated disks. Most of the time these changes do not cause problems. However, in some patients these changes can cause significant narrowing of the spinal canal resulting in spinal stenosis. Stenosis can cause pressure on the spinal cord and cause spinal cord dysfunction or myelopathy. The spinal cord relays information from the brain to the rest of your body and myelopathy can interrupt these important neurological pathways causing discomfort.

Ulnar Neuropathy is a disorder that involves the ulnar nerve (one of the major nerves in the arm).  Ulnar neuropathy is usually due to entrapment in the elbow area, the region of the “funny bone”.  This entrapment may be spontaneous and related to thickening of adjacent ligaments and muscles. This can be related to a prior injury in the area with associated scar formation that leads to a delayed onset of the nerve compression often years after the injury “tardy ulnar palsy”. 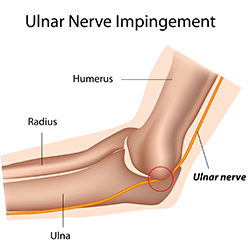 Holiday season is quickly approaching and some of our patients are booking their flights to go home to see family they don’t get to see any other part of the year. We love to see their excitement. But hate to see the anxiety that ultimately sets in when they think of the low back pain they experience when sitting for a long period of time.

By the very nature of the word “vacation”, a person should experience the act of vacating their normal routine; including dealing with chronic back pain. So we’ve put together an action list for those flying to family and friends this season to help them prevent back pain on plane rides.

For most, November marks the month of temperatures dropping, football-related blood pressures rising, and turkey-induced napping. But for others it’s a month to rally behind those living with epilepsy. For National Epilepsy Awareness Month, we want to educate all our readers and patients on what epilepsy is and what the treatment options are.